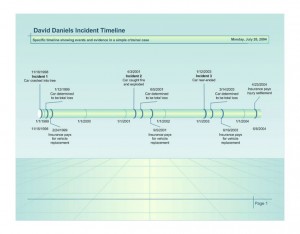 No matter how it can look on television, crime is not often as cut and dry as one might think. Because crimes involve people and people’s lives, often the chain of events and evidence can be murky at best. It’s the job of the criminal investigator to put together the puzzle pieces in a way that makes sense to determine what, precisely, happened. While there are a lot of tools available to assist in this task, the simple ones are often the best. That’s why it’s a good idea for anyone involved in criminal investigation to have access to a criminal evidence diagram to help put all the facts in order.

What is a Criminal Evidence Diagram?

A criminal evidence diagram is a template that’s used to display evidence in an easy to understand, meaningful way. The goal is to arrange the evidence in such a way that people can see the big picture in order to draw better conclusions about what happened with a given incident. In addition to helping investigators though, a criminal evidence diagram can also be useful to trial lawyers who are attempting to show the facts to a jury in a meaningful way so they can see how the conclusions in a certain case were drawn.

How Does a Criminal Evidence Diagram Work?

These criminal evidence diagrams are actually fairly simple to use, and they don’t require any special software or computer savvy to create. All someone needs is the evidence to be input and a computer with both a reliable Internet connection as well as Microsoft. If someone has those things, then creating a good diagram is as easy as one, two, three.

The first step is to download the template for free. Simply click the link and save it to the computer. Once the template has been downloaded, open it up to make sure the file works as it should. At that point click Save As, and name the file (typically something memorable, like Case Name Evidence Diagram is a good idea). Once it’s been named and saved, all that’s left to do is to fill in all the blanks so the investigator can get a good, solid look at what the evidence he or she currently possesses says happened. Additionally, if there are more blanks, then this template will show investigators just which blanks need to be filled.